Welcome to Any Given Sunday Madden Sim League on PC!
Welcome to the official league site of the Any Given Sunday Madden Sim League on PC! After a successful Madden 19, we are entering another year of Madden on PC. We successfully completed six full seasons last year with 32 members consistently being a part of the league experience. We look forward to being bigger and better this season. This site is your one stop shop for all AGS related news and information. Stay up to date with the latest articles, stats, podcasts and highlight videos all season long. Our primary method of league communication is through Discord and if you are interested in joining the AGS League, please Apply HERE! Thank you for your interest and we look forward to having you join the AGS experience on PC!
Please check out our League Youtube Channel!

The Curious Case of McBosher

by RickyFandango | 7 months ago | 0 Comments

You could call them the best players out of each coast, already ESPN projects that Todd McKee and Dave Bosher are the two top prospects of the upcoming 2021 NFL draft. McKee has drawn comparisons to Ravens quarterback Lamar Jackson with his quick feet, rocket arm, and ability to extend the play. Bosher is quite likely the best linebacker to come out of the draft, the centerpiece of a dominant Georgia defense. Two players, one offense one defense, on opposite sides of the country. What they have in common?

“I mean, I’ve got a good 2 inches or so on the guy.” Bosher was amused by the postgame question everyone has been thinking since the start of the college football season. “But yeah, we’re not related or anything. Just one of those funny coincidences.”


It’s easy to dismiss the coincidence at first glance, but even with pictures placed side by side, it’s difficult to tell the two apart. Even the official photos on the Oregon State and Georgia athletics sites carry the same general facial expression and similar short hair style, on top of already similar facial features.


“Yeah, I guess he’s sort of my twin. Kinda sad we don’t face each other this year, I’m sure the internet would love that.” McKee responded in a recent interview.


Social media was quick to spread discussion of the two players, with countless memes and a twitter hashtag #McBosher trending last saturday. McKee even joined in on the fun with a tweet of his own. 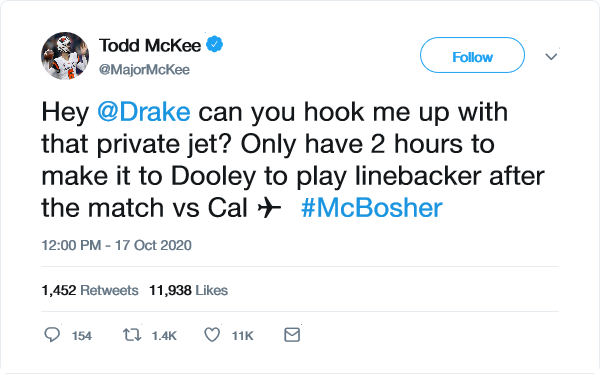 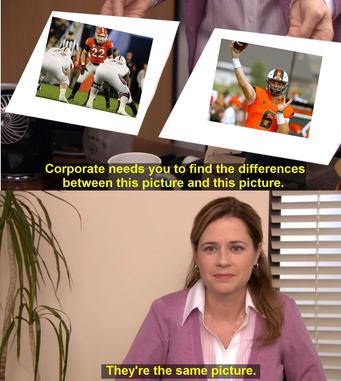 Odds are, it’s just a funny coincidence that the two best college football prospects look completely identical. But maybe, just maybe, we have all caught a glitch in the matrix, and the simulation forgot to swap templates before creating another football superstar.