MSR Season 13 Week 12 Primetime matchup features two AFC East teams battling for a playoff spot or pride in the final season of MSR on Madden 19. The Miami Dolphins will be hosting the New England Patriots in this matchup. Both teams are coming in with a new coaching staff so we don’t know what to expect in this game. The Dolphins are coming into the game at 1-9. It is quite unlikely they have a chance to make playoffs but miracles do happen. The Patriots are coming in 5-5 just two games behind the division leader Bills. A win in this game would help close the gap with the Bills. 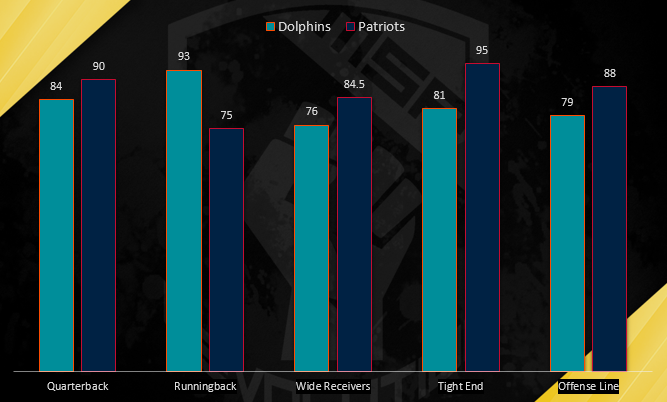 From an offensive perspective, the New England Patriots have the overall advantage at every position group besides running back. (Note: The overalls were determined by top quarterback, running back, two wide receivers, tight end, and five offensive lineman.) The Patriots would have tied in overall with the Dolphins at the running back position but their top RB, Sony Michel (93ovr), has been injured since week 7 and it is unclear at this time if he will be able to play in this game. 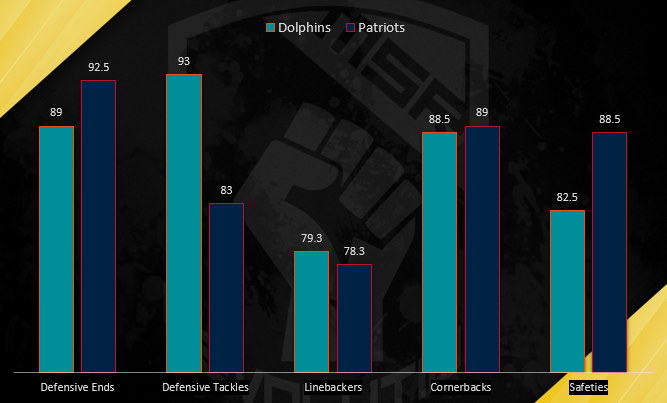 On defense, these teams are more evenly match but their strengths are spread into different parts of the field. For the Dolphins, their strength is in their defensive line and cornerbacks. If Sony Michel is unable to play this game, the Patriots will struggle to get anything going on the ground and will be forced to play into a good cornerback duo. For the Patriots, their strength on defense are their defensive ends and secondary. With the Dolphins lack of offensive lineman, they will struggle to contain the two power rushers from New England give their secondary a chance to play more aggressive.

While the overalls of Miami’s linebackers are quite low (79.3 overall average), they excel in pass coverage. MLB Kenarious Bussey has 91 zone coverage that will help against New England’s tight ends. New England has two top tight ends in Benjamin Sheppard (95ovr) and Noah Fant (85ovr, 89 speed). If Sony Michel does not play in Primetime, these two players will be the gateway to success on offense. This matchup should be looked at closely throughout the game.

Miami’s star player on offensive is their running back James Watters. Watters can do it all, he has above average speed, strength, and elusive ability. On New England defensive line, their weakness lies in their two defensive tackles, Malcolm Brown (86ovr) and Kevin Mariani (80ovr). While these two plays are no slouches, they can be a liability compared to the defensive end counterparts. Miami and Watters should look to attack the inside of the line where the Patriots are the weakest. The Patriots do have MLB Nate June manning the middle of the defense who is a decent run stopper to help out. If Miami can create some holes in the interior, Watters should have an easier time making a positive impact on the game.

Who do you think will win this Primetime matchup? The Patriots or Dolphins?