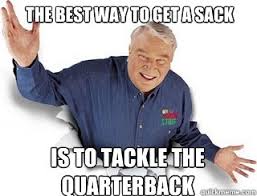 It's not clear which complaint about defense in Madden 21 is heard more between the lack of interceptions or the lack of sacks. The lack of interceptions narrative took a pretty big hit with our previous article, basically eviscerating that myth with the league's actual numbers through 176 games played. So now we are turning our attention to the pass rush for the SFL and Madden 21. This, it turns out, may be a valid concern.

As our readers know, the SFL is more concerned with recreating a realistic football experience in the world of flawed Madden programming than the circus of other so-called simulation leagues. This is no easy task given Madden's state, but we make an honest effort nonetheless. Because we are concerned with realism, we try to have a rule set that helps ensure that all teams play with an eye towards strategy and less towards stat chasing or wins obtained by exploiting Madden's many issues.

Madden 20's introduction of X-Factors and Superstar players (especially pass rushers) made controlling the sack statistic nearly impossible. Several players broke the actual NFL record for sacks, and sack totals in the 40s were not unheard of. Most concerning was that these players could do this as AI players without the benefit of the user boost that made MLBs with 30 interceptions a real thing.

I do want to take a moment and give EA some credit. They took two things that we most hated about defense in Madden 20 (LB usering and SS/XF pass rushers) and toned them down in Madden 21. It feels like LB play is pretty realistic now, even with a human-controlled player. The pass rushers have also been nerfed, but seemingly way too much. It feels like now even usering the best of the defensive linemen is useless. In Madden 20, the top-tier defensive players felt like the best players at their positions even when allowing the AI to play the d-line; Madden 21 has felt like a 180-degree change.

EA recently updated some gameplay issues to include;

"Tuning to increase AI pass-rush on All-Pro and All-Madden skill levels. When AI pass rushers win their matchup, they will beat their block sooner."

The league has only played 3 games under these new adjustments, so it is too early to tell if they will have any meaningful effect. We will be monitoring the situation for the rest of this season and hope to find a solution to get the SFL's sack numbers in line.

I think this is another one of those, some people experience it and others don't - kind of things. I wish hurrys was a stat that was tracked, I'd be interested to see the relation between Sacks, Hurrys and Ints.