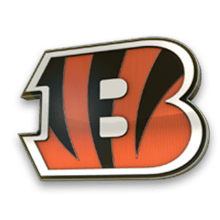 The Bengals head into their bye week with a solid 5-2 record. Both of their losses come from in division rivals. The Bengals were able to avenge one of the losses against the Steelers and look to also strike an even record with division leader Ravens.

On offense the team is being led by Joe Mixon who has appeared in only 5 of the teams 7 games. In the 5 games he has racked up 750 yards and 5 touchdowns.

Starting QB Jordan Ta’amu has played well. He has over 1500 yards, 68% completion rate, and a QBR of 103. Ta’amu must have a great second half of the season for this team to make the playoffs.

On defense 4th round pick Ryan Pulley has proven to be a great pick up. He has 2 defensive touchdowns and is second on the team in tackles.

The Bengals kick off their second half of the season against the Cleveland Browns.