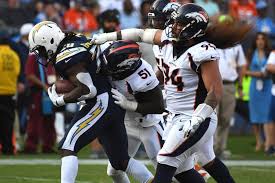 The injury bug hit the Chargers once again as Melvin Gordon goes down for 5 weeks with a growing injury. Gordon rushes for 71 yards on 4 carries against the Colts defense. He added another 39 on 9 carries against the Bengals before being sidelined. That is the second running back the Chargers have lost since the season has opened up. Speedy back Khalfani Muhammad is lost for the season with a torn pectoral. Darrin Hall and newly acquired DeAndre Washington will carry the load.