by bowdowntomeeeee | 1 year ago | 1 Comments Our Power Rankers have submitted their rankings for this iteration of your Void Power Rankings. As we move through this new cycle the user hierarchy will be reshuffled as users adjust to a new playstyle that comes with every iteration of a new Madden (At least that's what everyone keeps telling themselves). Our rankers used wins and losses, player stats, team stats, strength of schedule, and user reputation among other things ranking the 32 teams in the league. Some surprises throughout, but one thing is almost for sure; No, you are not ranked #1.

Matt Miller: Great user to go along with an even better team. Only close game was against another top 5 user.

Matt Miller: Smothering defense is what keeps the Eagles unbeaten this far. The Redskins did give them a run for their money however.

Adam Schefter: Led by the absolute juggernaut Fletcher Cox, the Eagles look locked-in to remain atop the NFC this season.

Matt Miller: Arguably the best user in the league. High powered offense with great defensive user that appears to be the driving force of the team.

Adam Schefter: It seems the Patriots might milk one more SB out of Brady (or vice versa?). Breakout star FS Obi Melifonwu looks like he’s trying to win a Golden Glove in centerfield.

Matt Miller: Great user that is undefeated but has yet to play a real top 10 team.

Matt Miller: Undefeated and known to be a good user but having only played 1 game it's hard to precisely rank them.

Adam Schefter: Foles looks SB LII form this season as he has an impressive 11-1 TD/Int ratio. All this team has needed for years was decent QB play.

Matt Miller: Known to be a good user with the Ravens is a scary sight. Lone loss coming from one of the highest scoring games of all time.

Adam Schefter: Lamar Jackson: 1st in Passing TDs, 1st in Passing Yards, 11th in Rushing Yards. That is all I have to say here. Oh and that Boykin kid is pretty good too if you didn’t know .

Matt Miller: Top 3 user with a bottom 3 team. Only loss coming to the top ranked squad in a close game. (Lost to Cardinals since this ranking was submitted)

Adam Schefter: John Ross III looks like he’s finally coming into his own this season and it’s the impact this team has been waiting for.

Matt Miller: The Lions need to turn it around on offense if they wanna keep up the record, with Stafford and the weapons on this offense though that shouldn't be an issue.

Adam Schefter: Easton Stick looks to get the nod in an already very young offense. I heard he and childhood friend Mason Rudolph have an ongoing bet.

Matt Miller: Looks to be dangerous with a relatively young bucs team. Only loss coming by 1 point.

Adam Schefter: Devin White is the early favorite for Rookie of The Year and the Bucs are playing like a real contender in the early parts of the season.

Matt Miller: The Bears will look to ride the leagues best rushing attack and a top 5 defense all the way to the promised land. Hopefully Trubisky doesn't get in the way.

Adam Schefter: Arguably the most talented defense in the league looks put a chokehold on the division with a relatively mild next 3 games.

Check out how the rest of teams rank below! 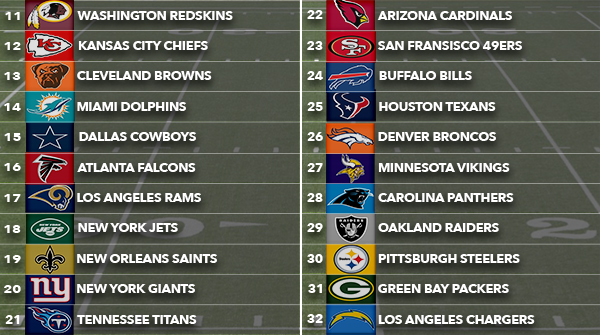