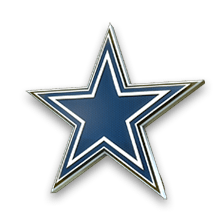 The featured quarterback of the MBL Season 44 Draft is off to a solid start for the Dallas Cowboys. Will Varga has amassed 2,360 yards through 219 passes, completing 155 for a 70% completion percentage. He adds 18 touchdowns and 14 interceptions through the halfway point of the season. The Cowboys are 5-4 — looking to get over the hump in order to reach the playoffs.

The Draft Pros reached out to Cowboys Owner, OSU, who had this to say when asked about what a Varga-led playoff berth would mean to the franchise, “It would mean everything. We have prioritized youth with this team and it would mean our strategy paid off. I know some fans haven’t been happy in the short term, but this whole plan has been about creating long term success. Will has stepped in and been a leader and the sky's the limit for him.”

With a 2-0 record versus divisional opponents, Varga has shown he is capable of winning the NFC East. However, he’ll be looking for more consistency down the stretch, as the rookie quarterback has failed to record consecutive wins thus far.

As the flashiest player in the MBL Season 44 Draft, the Washington State product has the speed and athleticism to create separation against any defensive back in the MBL. However, Yates has yet to find the endzone this season, and has taken a back seat to second-year tight end Jimmy Decker — who has 6 of the team's 7 receiving touchdowns. While the Raiders are just 2-6, Yates has helped the team to its most successful start to a season in years, and will look to improve on his role in the offense going forward.

Kristian Sexton and Devonta Freeman combine to create a rushing attack that ranks 10th in yardage so far this season. In a draft that was weak in the running back position, Sexton served as perhaps the most talented of the group. As a result, Sexton leads all rookie running backs in yardage (406). As Sexton continues to solidify his status as the feature back in Washington, the 6’2” 229 pound power back will likely make opposing defenses think twice before tackling him in the open field.

Draft Pro’s Pick for Offensive Rookie of the Year:

Will Varga is the current frontrunner for the Offensive Rookie of the Year award in MBL Season 45, and is our pick to win the award at the end of the year. While Varga shares the lead in this award race with Cincinnati Bengals quarterback Mick Jones (1,968 passing yards, 121/203 completions, 59% completion rating, 18 TD’s / 7 INT’s), he should maintain a lead over Jones for the title of Offensive Rookie of the Year. Both Varga and Jones will face a similar strength of schedule to finish the year, but Varga has a better supporting cast than Jones, and he is likely to improve as the year continues.