by xXunderoathzXx | 1 week ago | 0 Comments

Teams were graded by the following metrics:

Age - How young was your class, did you get guys that can grow quickly?

Talent - How good was your player, were you picking based on combine scores?

Value - Did you reach for your player or did you find a stud that fell in the draft?

Potential - Does this player have room to grow or are they pro-ready now?

Need - Was this a position of need or was it a best player available situation?

Check out our twitter at https://twitter.com/MBLDraftPros for our full grades for each team! 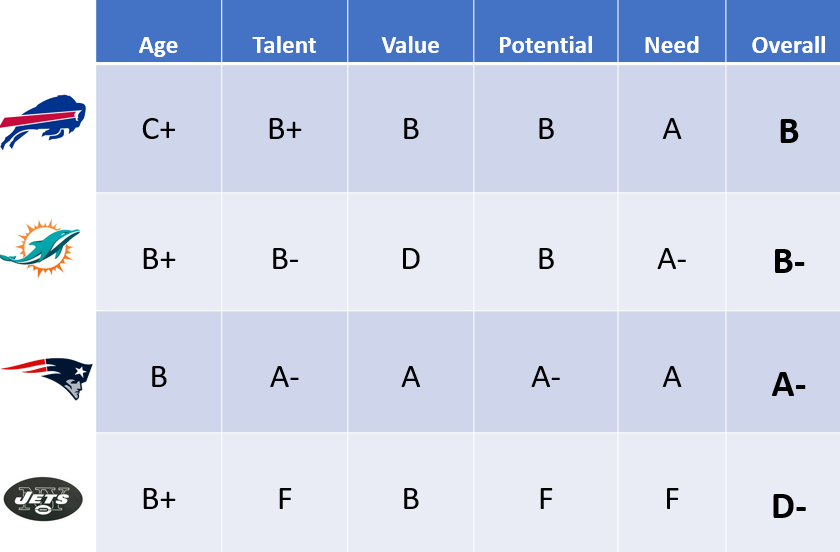 A pretty decent class for the Bills is highlighted by Sharp who looks like a potential star in the making. The only knock on him is his advanced age (23) for a rookie and lack of a dev trait. The Bills were able to grab a few depth players at the 5th slot in the draft. Solid but not spectacular.

The Dolphins grabbed an excellent OLB in Tommie Freeman. However they almost negated the pick by reaching bad with their other 1st on a 68 overall TE that was only selected for his speed. Still Freeman is one of the best rookies in the draft.

Shocking no one, the Patriots struck gold in this draft. Nelson is an X factor player and has a bright future with the Patriots defense who is always one of the league's top units. They grabbed some solid depth with the other picks but Nelson is going to be a great player for NE.

The Jets traded their 1st and 2nd round picks in a deal with the Panthers. Not a single player in this class should ever see the field. The only thing saving the Jets from a F was the fact that they didn't pick until the 3rd round. 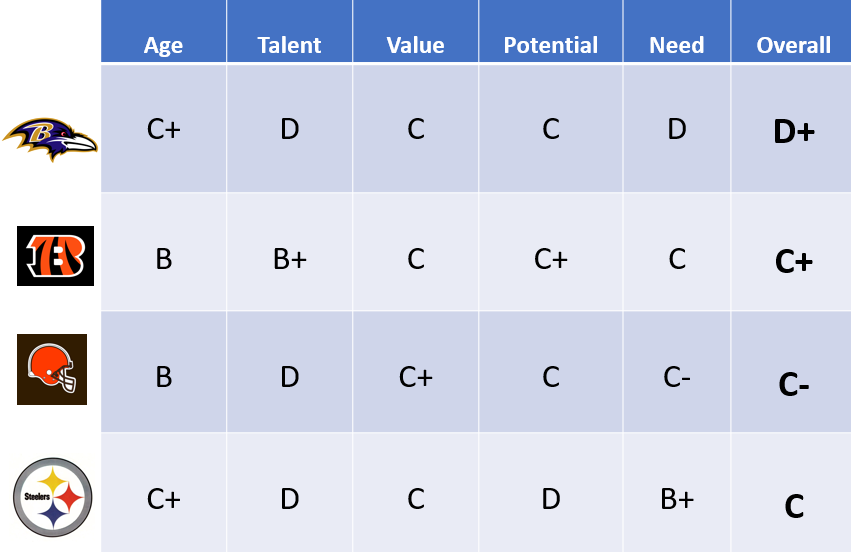 The Ravens didn't find much drafting at 30th overall.  Miguel Roman looks to be the best pick of the class but he projects as a backup and doesn't have an above average skill. The Ravens will make noise again but not because of this draft class.

Mick Jones is the headliner of this class for the Bengals. While he is only a 73 and lacks a dev trait, he is still a solid player though he will need time to grow. Outside of that the Bengals class is horrible as not a single other rookie is likely to see the field.

The Browns pulled the trigger on a trade for Broncos TE Noah Fant that cost them a 1st and 2nd round pick in a horrible draft. In hindsight, a great move. However this class is nothing to write home about. I see some depth along the offensive line but not much to be found from this class.

Just another uninspiring draft class from a truly bad draft. Boykin looks like a stud, but his ratings and development were ultimately disappointing. Don't expect much else from this Steelers class. 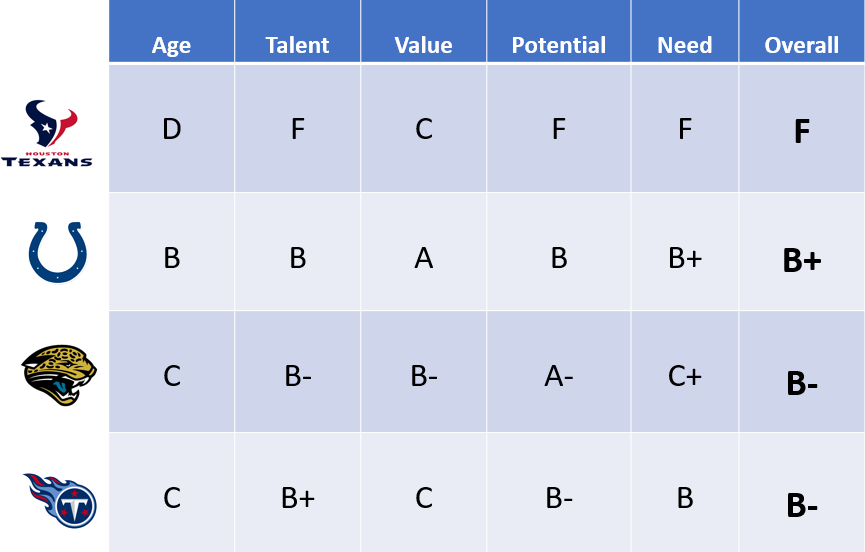 The Texans made some draft day trades to rid themselves of their 1st, 2nd and 3rd round picks in this draft. A wise decision. But they do not possess a single rookie worthy of ever being on their main roster.

Without a 1st round pick, the Colts did really well to pick up a falling Gabe McCray. McCray is only 21 and has 1st round talent and fits a major need for a team looking for upgrades at DT. Haden may provide Center depth but McCray was a great find in the early 2nd.

Kind of a dividing draft class. While Conley and Richardson both have potential, the Jags strongest position is CB. The team had needs other than CB to take one so high. In addition, 1st round pick Friedman looks like a bust. This class has some good and some bad, which ultimately grades out around an average grade.

The Titans draft class can be summed up in 2 players taken only a few draft slots apart. Newell is a highly skilled young rookie with room to grow. Gary Jordan was a fantastic college player but the 24 YO rookie looks like a total bust for the 12th overall pick. 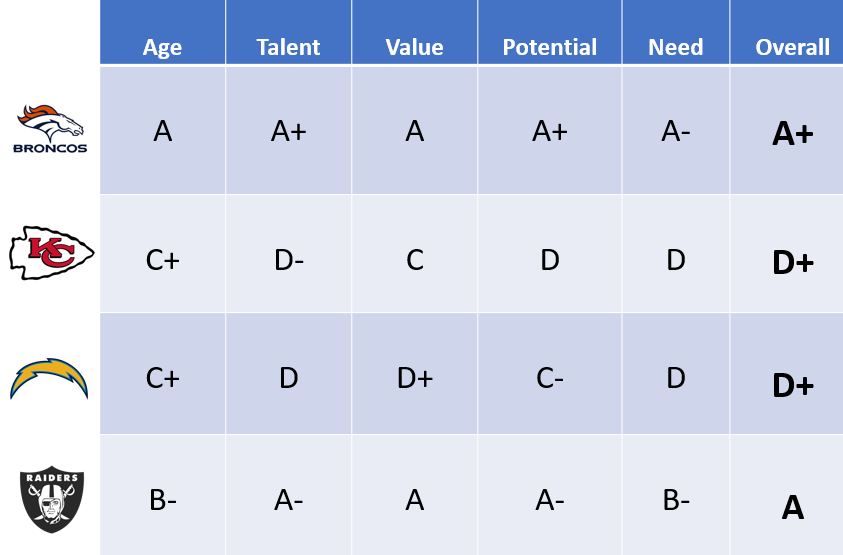 The Broncos struck gold with Shaq Hixon at 2nd overall. The young CB is by far the best CB we have seen drafted all cycle. He is already drawing comparisons to Jalen Ramsey. 21 Y.O. Yankey is also a good player to plug in along the Broncos young and skilled offensive line.

The Chiefs pulled the trigger on a mega deal for Packer DT Kenny Clark and parted with a 1st and 2 2nds. As a result this rather small draft class is completely devoid of talent. The trade was an absolute win for the Chiefs, but none of these rookies will ever amount to much.

A really weak class for the Chargers this year. Hankerson may have some value as a backup runningback but the 24 year old rookie doesn't look like he will ever be a feature back in this league. The Chargers 1st round pick Garmon also looks like a big miss.

Yates was an excellent pick at 1st overall and a need for the Raiders. QB Zach Quigley was also an excellent find and has potential to be an MBL starting QB. A really great class for a Raiders team in need of talent.

Thanks for reading! Tune in next year!