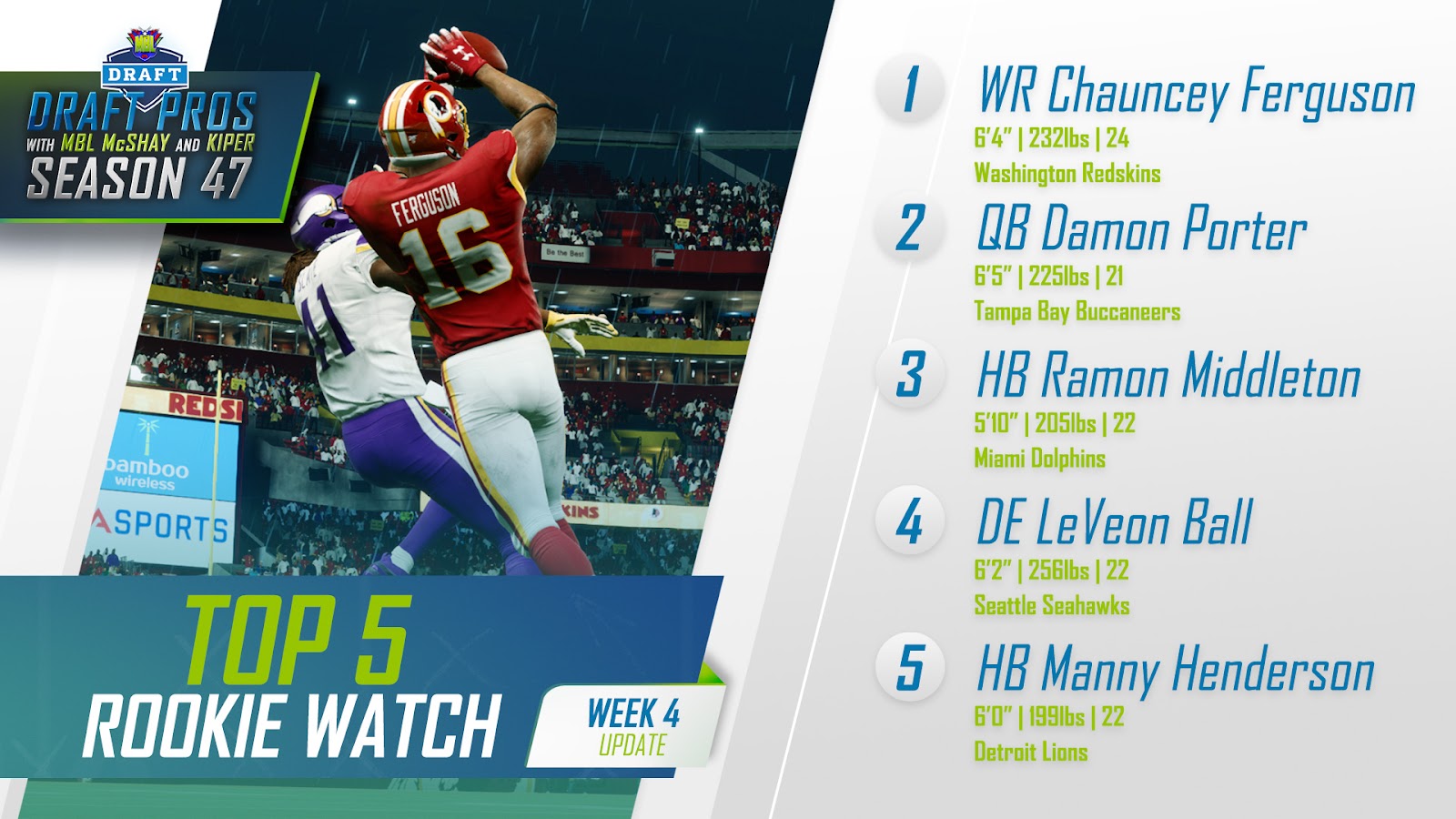 Chauncey is a very intriguing player, the 6’4” WR out of USC was selected by the Washington Redskins as the 16th pick in the 1st Round. The talent is definitely there as we can see from his big time performances through the first few weeks. The Redskins who were primarily a run first team last season with Christian McCaffery have made it known that they want to throw the ball more. With the Redskins at 0-3 and their next WR at 11 rec and 182 yds, some feel this may be a case of over targeting a Rookie and I share that sentiment.

The 19th overall pick, Damon Porter has been exactly what the Buccaneers need with an aging Andrew Luck regressing tremendously. After a stellar debut where he threw for 431 yds and 4 TDs against the Saints, Porter was met with some tougher opponents in the Falcons where he struggled a bit. In those games we saw a total of 380 yds, 2 TDs and 2 INTs. Moving forward I expect big things from the Buccaneers Rookie QB as he continues to get acclimated in their system.

With their 2nd Round Selection, the Miami Dolphins selected HB Ramon Middleton out of Penn State. Middleton was known for his pass catching ability out of the backfield and that has definitely translated into the MBL. With 7 total TDs, he leads all rookies in TDs and with 361 total yards he leads all rookie HBs. This is looking like an A+ pick for the Dolphins if Middleton can ride the momentum of this hot start for the rest of the season.

The first defensive player on the list, Leveon Ball did not play Week 1, but once he was given a chance he showed how dominant he can be. Recording 1 sack in his first game and then 4 sacks in Week 3. As a 2nd round pick Seattle had some hope he could develop into a great pass rusher, but Ball is showing them he has the skills to be great right now and could finish this season with double digit sacks as a rookie and fight for DROY honors.

Manny Henderson comes in at #5 and that is because of his huge Week 3 game, rushing the ball 17 times for 209 yards and getting into the endzone 3 times. With Dalvin Cook leading the Lions rushing attack, Henderson has shown that he is more than capable of making this a very dominant 1-2 punch for Detroit. With limited carries it may be hard for Henderson to fight for OROY honors, but expect some more production from the speedy HB out of Texas Tech.