by xXunderoathzXx | 1 week ago | 0 Comments

Hey everyone MBL McShay here, and welcome to the final draft grades for the 2020 cycle! Though time is limited for these players to make an impact, there is still opportunity. Some teams passed with flying colors, while others struggled. How did your favorite team do this draft? Thanks for checking us out!

Teams were graded by the following metrics:

Age - How young was your class, did you get guys that can grow quickly?

Talent - How good was your player, were you picking based on combine scores?

Value - Did you reach for your player or did you find a stud that fell in the draft?

Potential - Does this player have room to grow or are they pro-ready now?

Need - Was this a position of need or was it a best player available situation? 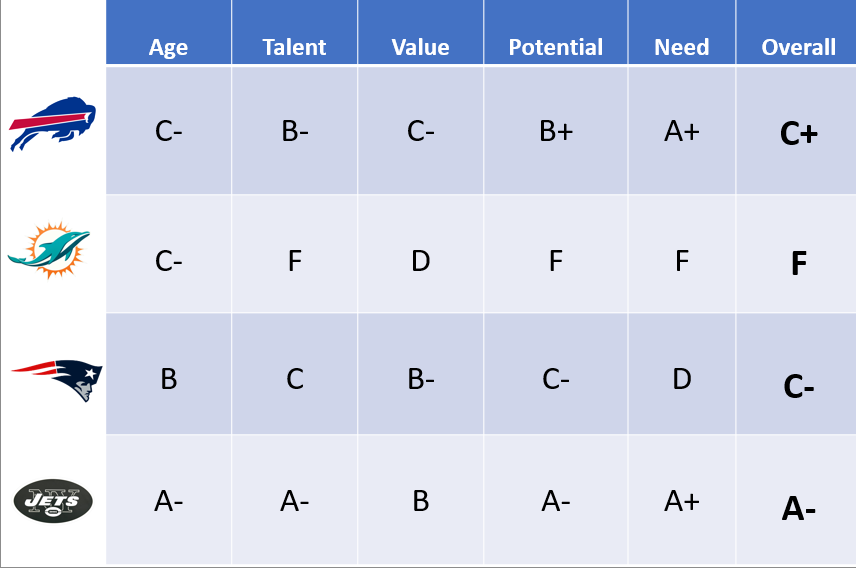 It is pretty much the tale of 2 draft picks for the Bills. 4th overall pick Farris looks like an absolute bust. For a RB to be taken in the top 5 you need to see Zeke or Barkley skillset. Farris is simply fast. However 2nd round pick Ford was a homerun. The Vanderbilt product has potential that a certain other GOAT Vanderbilt QB possessed.

The Dolphins draft class took a severe hit with the loss of both their 1st and 2nd round picks. The Dolphins have shown us once again that they place no value on their draft picks.

It shocks me to type these words, but the Patriots did not strike gold in this draft. There is a spot on the team for Bruggeman as a backup DE, but the class is lacking in both talent and potential. I doubt any of these players will see the field this season.

The Jets showed their division rival Bills the type of running back to draft in the top 5. Crosby has insane potential and is already a few steps ahead of Farris in terms of talent. Crosby will be the best RB in New York since Bentley. The Jets other 1st round pick Josh Bond is a bit of letdown and hurts the value of this class a bit. 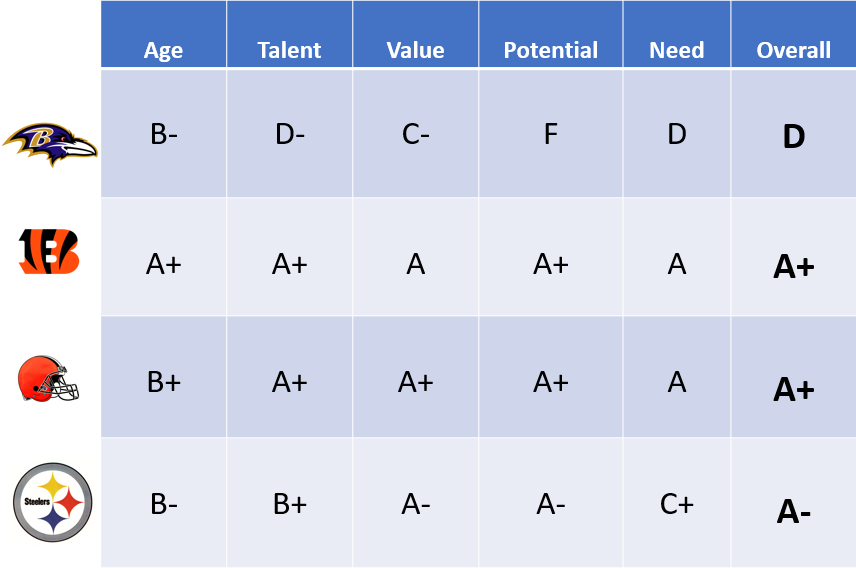 The Ravens traded their 1st round pick to the Bucs and pretty much doomed their draft class. Ty Frost has some value as a below average starter or a decent backup but the Ravens will not be winning the division again on the strength of this draft class.

The Bengals cashed in on 2 top 15 picks. Thomas is a stud and has scary potential. Becton is a beast up front as well and a great value pick at 15. Cobb, Boswell and Fredrickson are all worth mentioning to. The best part is all of these players are 21. Some great young talent here for Cincy.

The Ohio teams struck gold in this draft. Tuck was an amazing find at pick 16 and Mullins is the best WR in the class. The Browns have missed OBJ but Mullins has the potential to fill the #1 WR void. The Browns have been impressive in the draft in recent seasons.

Christian Norton is a fantastic looking OLB. The only question I have is fit. Carter and Watt should both be the starters, and I disagree with recent rumors that Watt will slide in at DE. The Steelers either seem to strike out or hit home runs with their picks and Norton is an excellent player. 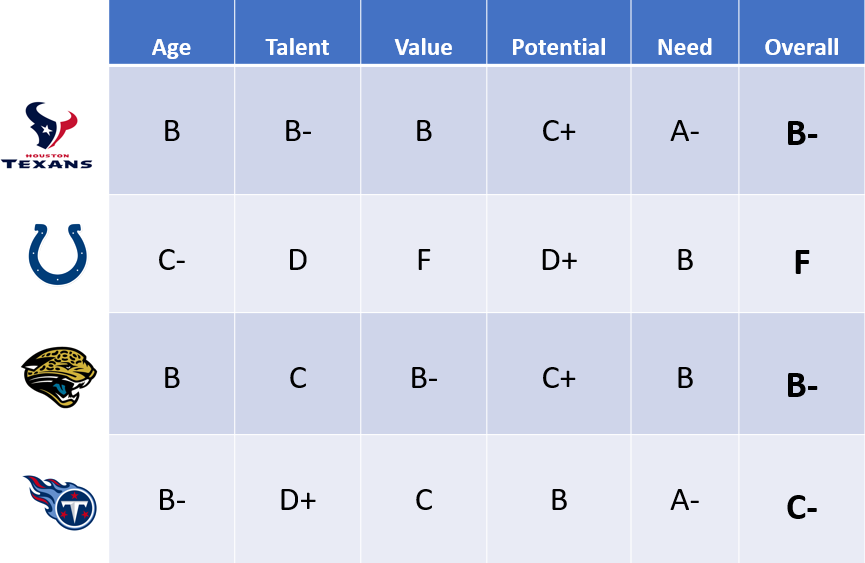 The Texans filled perhaps their biggest need by taking a slot CB late in the 1st. Overall I am definitely not in love with this draft class, but the Texans always pick late in the round and Maxey is a nice pickup and should contribute early.

The Colts LB core was always going to be a focus but the Colts whiffed in spectacular fashion. Any thought that 4th overall pick will be able to replace Leonard is laughable at best. Watts is a speed rusher but is already 23 and doesn't possess much potential to improve. Watts would be an okay 3rd round pick but never a top 5 player.

While I like Batten as a player, he probably plays one of the least impactful positions. Offensive lineman have been hard to develop but Batten has some potential. Outside of Batten? Nothing much to write home about here.

While the Titans probably won FA with the signing of Sam McCoy, I don't see them as winners here. Hewitt is a disappointing prospect. He struggles to run routes and doesn't possess the physical ability to scare teams. He has solid hands but he has a long way to go to be a solid player. 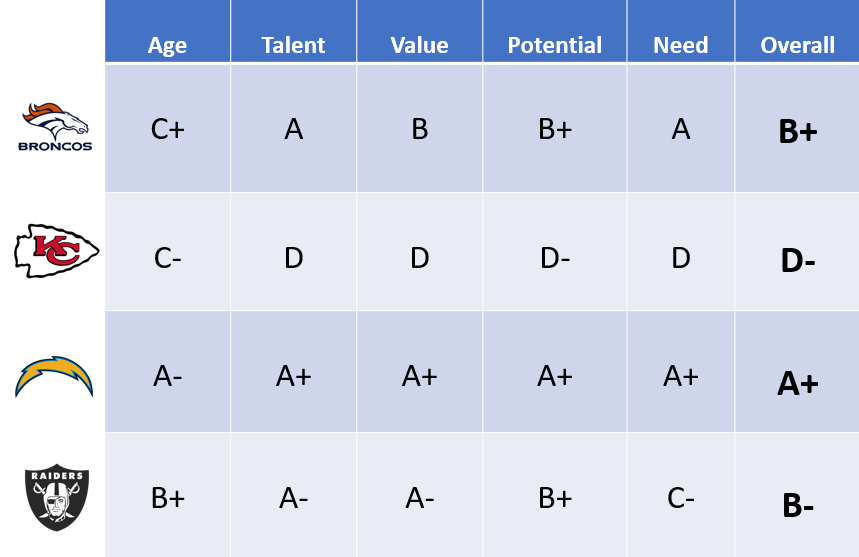 Siler is a stud at MLB, which has been a major weak position the last 10 or so seasons in the draft. While Siler is a great prospect, the Broncos kind of whiffed with their 2nd and 3rd round picks which included a FB. I would hope for a more well rounded class from a team in the 5th overall slot.

The Chiefs traded their 1st round pick and have a pretty much unplayable draft class as a result. After such a solid run to the Superbowl, fans were hoping for an improved roster but it looks like the Chiefs will have to be content to just run it back.

The Chargers were in the unfortunate position of having a massive hole at QB and an extremely late draft pick to fill such a monster need. In what world is Newkirk the 29th best player in this class? He is 21 and possesses fantastic arm strength and accuracy for a rookie. This looks like one of the best steals in years. And the kicker is the Chargers NEEDED a QB with this pick and scooped up a #1 overall talent at pick 29. Wow.

What exactly is the plan in Oakland? No one doubts that Hollis is a fine player, but how is he different from former 1st overall pick Yates? The Raiders are consistently 32nd in offense. Any path for the Raiders winning games involves a dominant defense. They want the 5 TD and 20 INT Quigley to air it out more this year with an investment in another star WR? Why? You aren't the Chiefs, stop trying to be.

Thanks for reading! Tune in next year!