by xXunderoathzXx | 1 year ago | 1 Comments

Hey guys! As we continue to close out the cycle we want to focus today on building the ultimate roster of all drafted players! We are going to build our team position by position to field the best possible roster. We will also list some honorable mentions because some of these races were pretty tight!  We factored in a number of things including: overall rating, statistics, and team success. Thanks to Jamie for the great graphic support as always! 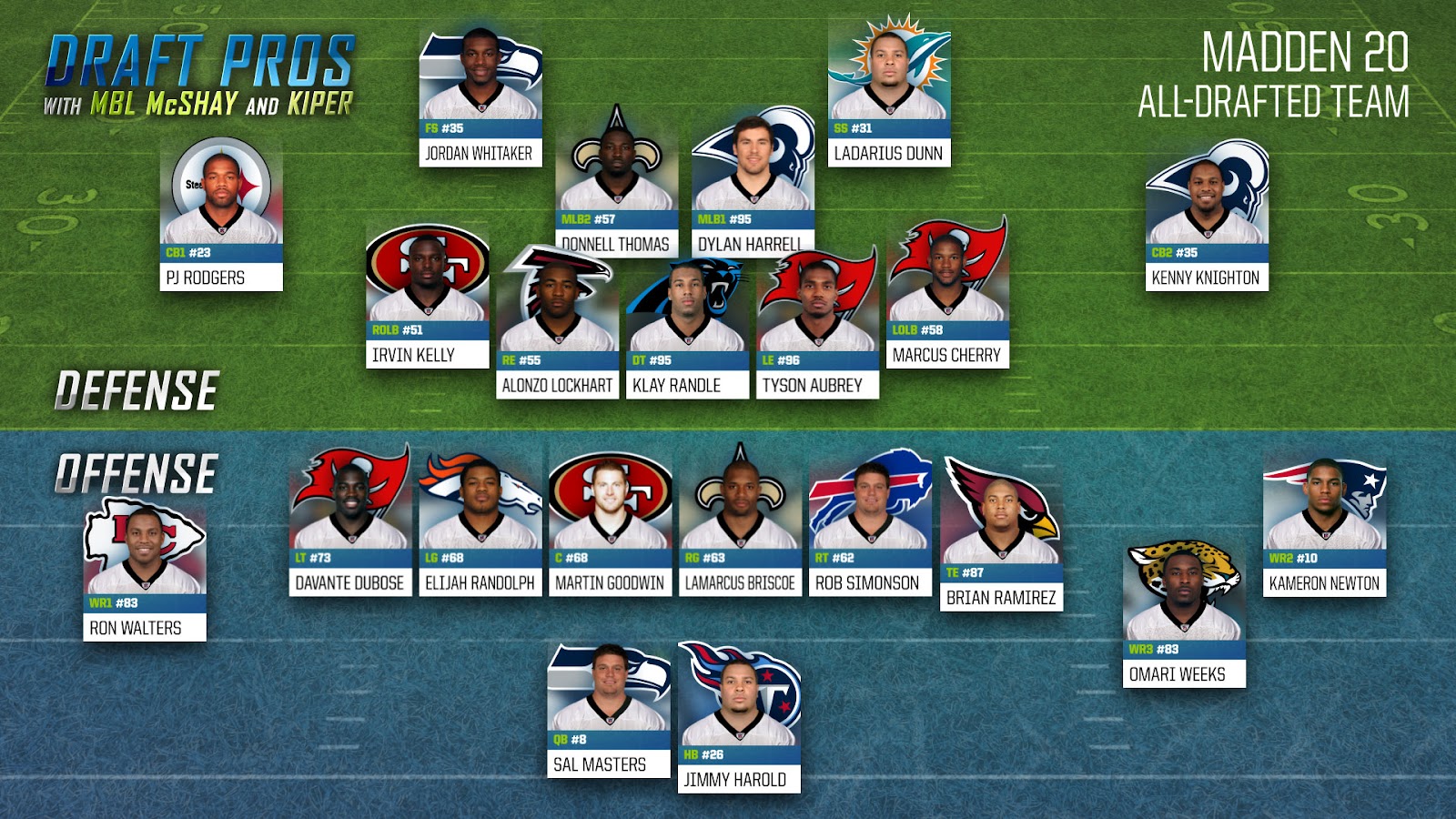 Drafted: Season 46 draft, 4th Pick of 3rd Round by Seahawks

Drafted: Season 43 draft, 8th Pick of 1st round by Titans

This was a tight race but Harold has been the most consistent RB this cycle with 1k rushing seasons in 5 of his 6 years in the league. Harold took over seamlessly for Derrick Henry and helped the Titans stabilize the RB position. He has great vision for holes and features a prolific juke move and an explosive 1st step.

Drafted: Season 42 draft, 1st pick of 1st round by Bucs

An easy pick for the left tackle spot. BuBose has turned into a prime pass blocker for a much improved Tampa Bay offense. Tampa took him 1st overall to help stabilize a weak offensive line and he has been amazing for the Bucs. He really has no competition for this spot as he has become one of the league’s best offensive lineman.

Drafted: Season 43 draft, 2nd pick of 1st round by Broncos

The big strong guard from Clemson comes in as our 2nd offensive lineman. Though the Broncos offense never really clicked, it was of no fault of Randolph. He is extremely quick for someone his size and has turned into one of the best guards in the league.

Though he has primarily played as a tackle, Godwin’s lower strength and well rounded skill set makes him an ideal center. He excels at just about everything and has been a solid player for a 9ers team needing to rebuild its offensive line.

Drafted: Season 45 draft, 25th pick of 1st round by Saints

The Saints snapped up Briscoe as he fell to the middle of the 1st round in a pretty weak draft. Briscoe has become one of the best offensive lineman in the MBL and has a bright future at only 25 years old.

Drafted: Season 38 draft, 12th pick of 1st round by Bengals

A tight race but we will give the edge to Simonson as he is the most well rounded of the candidates. He is powerful, quick, and is a run blocking specialist. This Clemson offensive lineman secured a 6 year deal after the Bills decided to commit their future at tackle to the talented lineman.

Drafted: Season 42 draft, 21st pick of 1st round by Cardinals

A close battle but Ramirez has proven himself a major weapon over a longer period of time over the other candidates. He is a sure handed target with great route running skills and a quick 1st step. The Cardinals offense improved significantly once they drafted the Stanford product.

Drafted: Season 42 draft, 10th pick of 1st round by Chiefs

What can we say about Ron Walters that hasn’t already been said? He has put up over 1,500 yards in 4 seasons of his career. He was a major piece of one of the best offenses we have ever seen with the Chiefs. The combination of Walters and Hill was a scary prospect for any team looking to shut down the Chiefs offense.

Drafted: Season 41 draft, 32nd pick of 3rd round by Patriots

As we touched on in our Steals of the cycle article, Newton is a talented, talented player. 5 seasons of 1k yards, 3 (and maybe 1 more?) superbowl rings, what more could you ask for in WR2? He is a crisp route runner that Tyree Jackson was able to rely on all cycle long.

Drafted: Season 44 draft, 9th pick of 1st round by Jags

Weeks earns this tightly contested spot for one reason alone, consistency. While other guys have put up monster seasons (Valentine - 24 TDs, Carmon - 1735 yards), Weeks is the only WR with 1k yards every season of his career. Weeks is a deep ball specialist at 6’6’’ that helped the Jags offense really turn a corner once he was drafted.

Drafted: Season 43 draft, 3rd pick of 1st round by Falcons

The fearsome Falcons pass rusher had a slow start to his career (playing sparingly behind Leonard Williams and Tak) but really has caught on the last 4 seasons averaging nearly a sack a game. Lockhart really grew into his own and he helped the Falcons capture a SB victory as a key contributor.

Drafted: Season 41 draft, 8th pick of 1st round by Bucs

Aubrey completes our all NFC South Defensive End group. Tampa has rebuilt their defense into one of the best units in the MBL and Aubrey has been one of the key pieces. Aubrey has been consistent with 5 of his last 6 seasons with over 10 sacks.

Drafted: Season 44 draft, 24th pick of 1st round by Panthers

When the Panthers took Klay Randle 24th overall, the expectations were low for this player who slipped to the later part of the 1st, but Randle has proven he is one of the league’s best at DT. He has averaged around a sack a game from the DT position, an insane feat. To make it even more impressive, he is a nose tackle in a 3-4 scheme.

Drafted: Season 42 draft, 3rd pick of 1st round by Bucs

Originally an extremely athletic 4-3 OLB, Cherry was asked to convert to a pass rusher for the Tampa Bay scheme. Boy did it pay off. He had a slow start to his career but has sack totals of 28, 24 and 27 in his last 3 seasons. He is quite simply the best pass rusher by a mile on this list. Amazingly he is still only 27 and is just entering his prime.

Though he has had a decent career, I expected a little bit more from Kelly. That being said, he has played well enough to land himself on this list. The numbers aren’t eye popping like Cherry’s, but he has developed into a pretty solid pass rusher in his own right.

Drafted: Season 44 draft, 4th pick of 3rd round by Rams

Who is Harrell you might ask? Good question. The MLB position has been unquestionably awful this cycle. While Harrell hasn’t been a tackling machine, he leads all MLBs by a significant amount with 15 INTs. He has also picked up 13 sacks. Definitely not impressive, but the best of the bunch.

Drafted: Season 46 draft, 9th pick of 1st round by Saints

With our “coverage” MLB in Harrell, we have a tackling machine in Thomas to fill our other position. Though very young, Thomas has averaged over 50 tackles a season in his early career. He has shown some pass coverage ability as well with 5 INTs. MLB is a weak position, but these 2 players have produced the most.

Drafted: Season 41 draft, 3rd pick of 1st round by Panthers

PJ Rodgers has had an impressive career with the Steelers. 37 INTs is an insane number. PJ is very balanced, excelling in both man and zone coverage. The Steelers have used him to cover the other team’s WR1 and Rodgers has grown into one of the best CBs in the league.

Drafted: Season 43 draft, 5th pick of 1st round by Rams

Kenny Knighton burst onto the scene in his sophomore year with an insane 11 INT season. Knighton has benefited from playing in the INT happy NFC West, but his numbers are beyond impressive. He is the best man cover corner in the league currently.

Drafted: Season 42 draft, 15th pick of 1st round by Seahawks

Whitacker has been impressive for the ballhawking Seahawks secondary. He has done just about everything with 34 INTs, 6 TDs, 10 sacks, and over 200 tackles. A well rounded player who contributes just about everywhere.

Drafted: Season 41 draft, 16th pick of 1st round by Dolphins

The man blitz happy Dolphins ask their Safeties to do alot; Man cover, rush the passer, and make TD saving tackles. Dunn has filled that role valiantly. 29 INTs, 19 Sacks, and over 200 tackles. Dunn has been impressive for the Dolphins and is a great well rounded player to finish off our list.

And this is our full team! Shoutout to Jamie for the great graphic! Thanks for reading. If I missed someone you think should have been included let me know in the comments below!