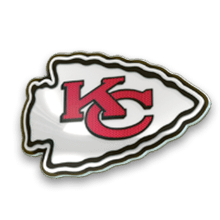 The Morning After: Adams Coming of Age

Davante cements his place as K.C.’s top target in victory over Denver Kansas City came into last night's game with a lot to prove. After the disappointing performance against Seattle last week, there were a lot of questions around the Chiefs facilities leading up to last night’s contest. After a 34-13 win in Denver, the team feels they've provided plenty of answers. The defense forced three turnovers, including a blocked punt returned for a TD in the 3rd Qtr that essentially put the game out of reach. However, the play of the game came just before halftime when Trey McIntyre found Davante Adams on a perfectly thrown post route that split the corner and safety. Adams took the pass for 63 yards to the end zone to close the first half and stamped his claim as K.C.’s #1 wideout.

DaVante's ability to make big plays after the catch was what attracted the Chiefs to signing him in the offseason where he was coming off his best season as a pro in Green Bay. His choice to come to the Midwest was based on the success he saw K.C. experiencing the past couple of years. With the Packers still in a youth movement at QB, Adams was assured by McIntyre that he would make sure he got the big play Adams plenty of opportunities to shine if he joined the team. In the past two weeks, Adams has 10 catches for 213 yards with 2 TDs. The player who came out of Fresno St. with questions about his work ethic is finally seeing the fruits of the hard work he's put in. He could be the key cog that gives this franchise their first championship in recent years.

The Warchant is an official publication of the MBL