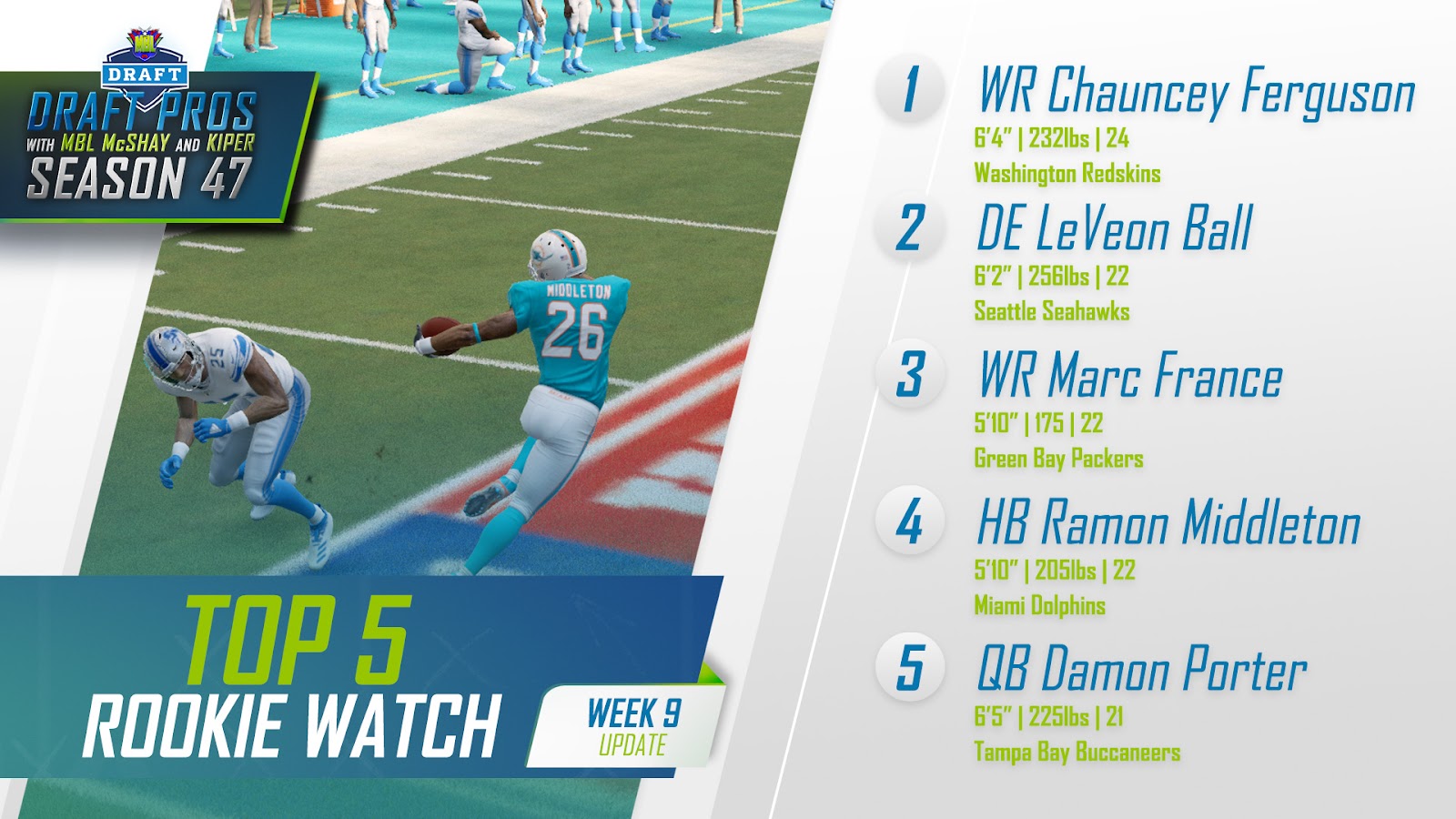 This statline is amazing to see for a WR in his rookie year as Ferguson has toasted defenses all season and currently leads the MBL in receptions at 62. Ferguson has responded well to the high volume of targets, but the Redskins have not been able to string together wins. Ferguson will continue to shine, especially with fellow Rookie WR Morgan Pryor being out for the next 7 weeks with a dislocated ankle, expect Ferguson to play an even bigger role on this offense than he already has.

LeVeon Ball has been the big surprise in terms of rookie performances this season. Through 11 weeks of play he has almost eclipsed the double digit number for sacks and sits at 2nd on the Seahawks with 9 sacks. This was the perfect team for a young promising pass rusher to go to as the Seahawks have focused on developing and building their secondary and that leads to a lot of coverage sacks and Ball is feasting on those opportunities.

After the Packers traded Davante Adams to the Chiefs earlier this season, Marc France jumped at the opportunity to take over as the #1 WR in Green Bay. Having a tremendous rookie campaign so far, France has helped the Packers to a 6-4 record and 1 game out of 1st in the NFC North. As the season progresses, I expect to see more and more of the speedy rookie WR out of Wisconsin, Marc France.

Ramon Middleton has not made his presence known running the football, but catching it out of the backfield. Middleton has been just as impactful as some WRs, sitting at 48 rec he currently has more receptions than our #3 Rookie, Marc France. With 13 total TDs, Middleton has been a beast at finding the endzone. Sitting at 4 now may only be temporary because I could see Middleton rising up this board to possible even #1 if he keeps producing at a high level.

#5 on this list could have gone to many different players, but Damon Porter cracks the Top 5 once again. Porter is the only rookie QB worth mentioning despite leading the Bucs to a 3-7 record and having 3 more INTs than TDs. The entire offense has been put on his back due to the Bucs Rookie HB Braydon LaFleur having only 221 yds and averaging 2.5 ypc. I believe once the Buccaneers can get a rushing game going they will be able to get the most production out of their young QB.