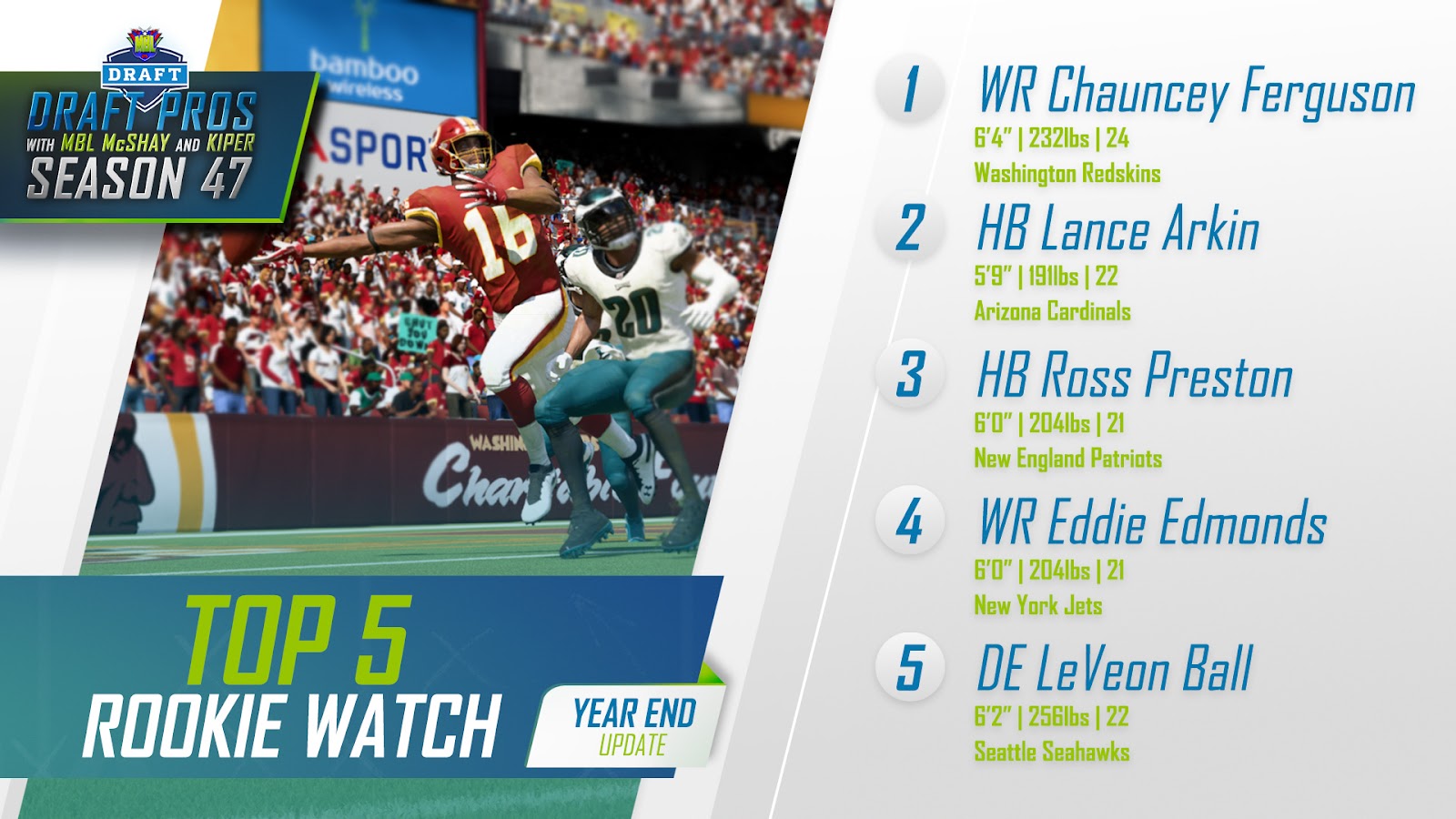 The Redskins drafted the 24 yr old Chauncey Ferguson with hopes that he had the experience to come into a very young WR core and be a leader in his rookie year and they got that and so much more. Leading the MBL in receptions with 95, that number is 10 above the 2nd in the MBL, fellow rookie WR Eddie Edmonds of the New York Jets. Ferguson was also one of 3 WRs to average over 100 yds a game along with Eddie Valentine and Calvin Vaughn. Being able to haul in that many passes for that many yards and TDs is an incredible feat for a rookie and that is why he is #1 on the Draft Pros Rookie Top 5.

The 2nd half of the season for Lance Arkin was spectacular to watch and that was all due to the Cardinals starting to trust their Rookie HB more. Before Week 10 Arkin only had 10+ carries 3 times, but from Week 10 on he never had less than double digit carries and he did not let his team down. A true dual threat, Arkin added 52 rec to his 194 car and there was only one game all season where Arkin did not catch a pass. Going from not being on the Top 5 list at all this season to getting all the way up to being in the conversation to potentially be #1 is extremely impressive for the speedy HB.

I think the Patriots have found their new go to HB in Ross Preston. The University of Buffalo Alumn like Lance Arkin not only showed his prowess running the football, but also catching it out of the backfield. Preston was a big time difference maker for this Patriots team as he came away with 20 total TDs on the season. A high powered Patriots offense saw a ton of production out of their rookie HB and made Tyree Jackson’s job a lot easier. Going into his 2nd season I expect Ross’ production to skyrocket, with a year under his belt he know understands the Patriots system more and the Patriots understand how they can use him effectively.

Another player who is on our Top 5 list for the first time is WR Eddie Edmonds of the New York Jets. Edmonds showed up in a big way for the Jets as their #2 WR behind Kyle Lee. After trading away Mecole Hardman and then letting Michael Thomas hit Free Agency, this WR core was depleted and the Rookie took over the slack and delivered. The only critique I have for the WR out of SD State is that he only found the end zone 7 times. You gotta be able to get in the endzone to give your team a chance at winning games. The Jets had their worst season of the cycle in Season 47 and ranked 23rd in PPG and their inability to put their offensive weapons in the right positions to score TDs was their downfall.

A defensive end that can do it all is LeVeon Ball of the Seattle Seahawks. Ball has been a regular on our Top 5 and his play on the field speaks volumes on why that is so. He finished the season with 12 sacks as he was the only rookie to reach double digits in sacks while also finishing with 9 TFL he showed that he can also be very efficient at defending the rushing game as well. With the ball hawking secondary in Seattle locking down the opposing WRs I expect big things from LeVeon Ball who could potentially be a Top 10 edge rusher in the MBL in the coming seasons.