Over the last few weeks, we’ve taken a look at the overall ratings on offense and defense and even our first small looks inside the first information that dropped about M17 in early July. Now, we are going to take at some individual features and take a deeper look from guys who have played M17 early. We are going to take a look at the new and improved player ratings hub on the M17 website, the new (yet old) formation subs, and how the new scouting will work, including a few tips.!

So let me start this off by saying that just the fact you are here at DaddyLeagues means that this means zero to you. But, if for some reason you are totally disconnected from our site, then Madden has finally done what we’ve been doing for years. You now have access to the full roster database. You can sort and search any player on any team with any rating category. Congrats EA, you’ve caught up with DaddyLeagues has been doing for years. Also, if you’ve ever wondered how overall is calculated, the graphic above can help show you what goes into it. EA has admitted that overall doesn't mean all that much, but it does give you a good idea of what a player can, overall, do. 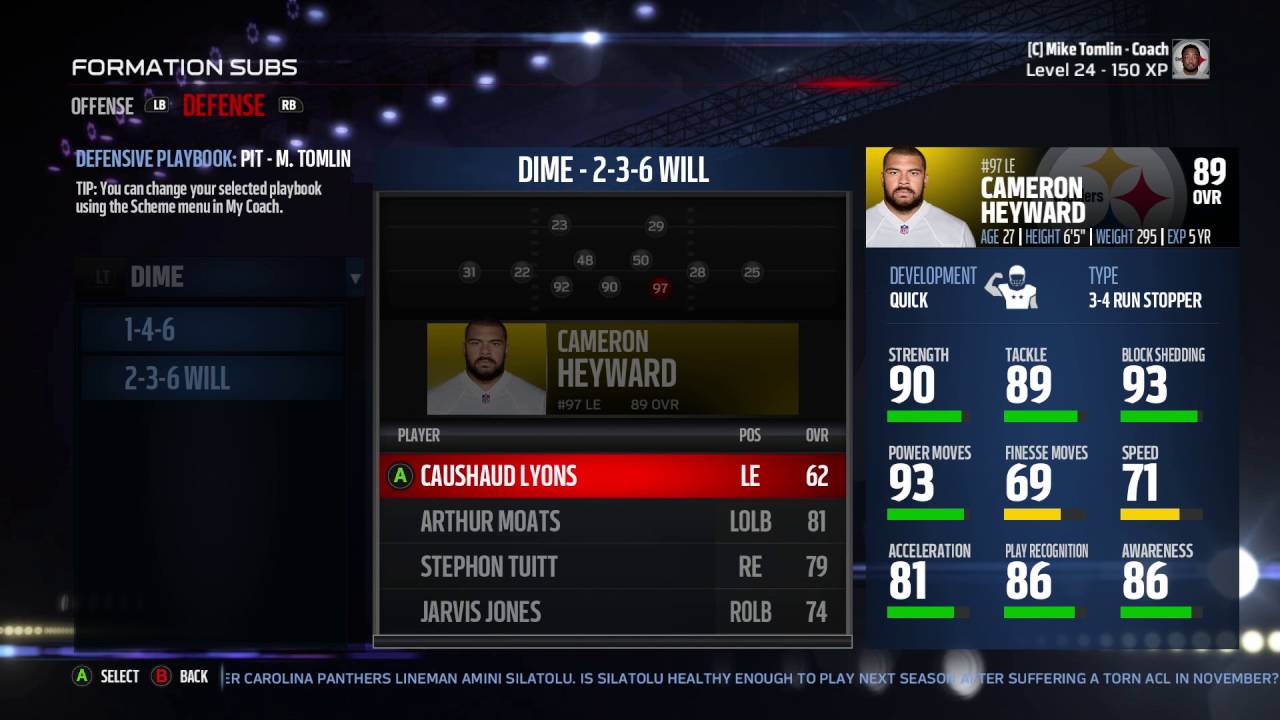 Formation Subs Are Back!

One of the things that a lot of Madden addicts have asked for EA to bring back, for a very long time, is formation subs. Having the ability to go in and pick what players play where and in what formations, is always a great detail touch that all of us find useful. It’s back, but with some minor things that make it not perfect. I am always very confused why they can’t seem to get things 100% correct, but it’s a step forward, I suppose. You can do formation subs after you set your playbook under your schemes. The issue is that you can’t set kickoff returns (why EA?!?!) and you have to put some twist if you use custom playbooks. If you use custom books, then you will need to pick a book that has most of the formations that you want, already in it. That books formation subs may be set, but the other formations, which are not in that normal team book, will not be able to be set. So a small work-around, but it’s something to have a majority of the features available.

Scouting has been changed this year. I should say, tweaked more than overhauled, but still changed. The scouting has been flipped per attribute. Now the first attribute will cost you 15 points, the second will cost you 10 and the last will cost you 3. This means that you aren’t able to scout every player in the draft and you will have to be smarter and more picky about who you want to scout. Max scouting points will be 3,325, while with expert scouting you will have 3,800 scouting points. To go with the increased scouting per attribute, there has also had many more draft-able players added. You will now have close to 360 players free to be drafted. With another 50 players who will be added to the free agent pool after the drat closes. These low draft-able players and even free agents who are added will have some hidden gems out there. Speaking of gems, your scouting combine numbers, now have a 10% variance added to them. So now a certain number doesn’t equal a specific rating. Now there is 10% difference from what it could possibly be. So, don’t count on everyone being that stud you think he is. Speaking of stud, they have also adjusted the drafts to fit more of what the players in the league are like. Players will now average between high 60’s to mid 70’s. If you get that 80+ overall player, then you drafted a real stud. The studs will be out there, but more sprinkled than planted around. Also, don’t give up on those free agent rookies which are sitting out there, because there are some good ones floating around. Now, to my commissioner friends, good luck in figuring out the best way to make that whole situation fair for everyone.

I am excited about formation subs being back, though I am disappointed that we aren’t able to fully use it with custom playbooks and there is no kickoff formation subs. That last one makes zero sense to me, but whatever, at least we get most of it as a function. The new scouting and draft sounds really great and I am excited to see how these added free agent rookies will work out. Small things to figure out, when it comes to leagues and making it fair, but mix in these rookies with the practice squad (which we will cover in a later article) and that sounds like even more exciting details. Here is where I have found some of my research and a great place to get more input: • Player Ratings Hub: https://www.easports.com/madden-nfl/news/2016/madden-new-ratings-hub • Formation Subs: https://www.youtube.com/watch?v=WLNmqwX1lJg • Scouting and Draft Tips: https://www.youtube.com/watch?v=I0Hr41lVW4k

Legit breakdown, leave it to EA to give us what we want but with a twist lol great stuff!