Pre-Season versus Regular Season; How'd We Do? AFC Edition 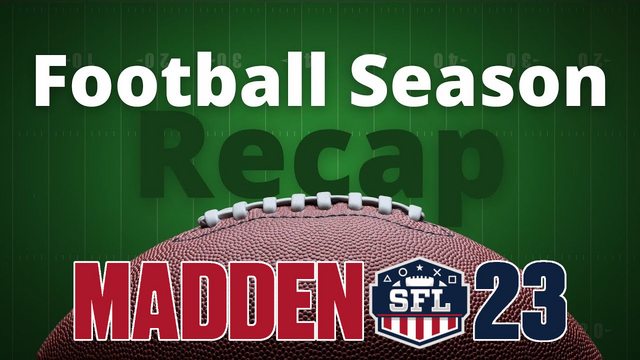 Before the first season of the Madden 23 cycle began, I attempted to predict how the season would play out for each division.  With the defeat of the Las Vegas Raiders in the final seconds of the AFC Divisional round, my pick to win the AFC and ultimately SFL Super Bowl 46 was dashed.  My NFC selection is still alive, but since I won't be correct no matter how the NFC playoffs finish up, and my Super Bowl pick is already eliminated, I thought I'd see how I did overall wih my pre-season predictions.  It should be noted that some of the teams did not finish the seasons with the same owners as they began, but that's the only excuse I can offer...

My pick for #2 in the division was the Miami Dolphins at 10-7.  The Dolphins struggled and finished 2-15.  Too be fair, I don't think anyone expected this to be the case.

My pick for 3rd was the New England Patriots at 8-9.  They did finish 3rd, but with a record of 7-10.  That's a reasonable margin of error on my part if I do say so myself.

I predicted the Bills would finish 4th with a record of 8-9 as well, but figured the tie-breakers would favor the Patriots.  The Bills ended up 2nd in the division with a 7-10 record.  So I was close on the record, but the Dolphins' collapse doomed my predictions for the AFC East overall.

The AFC West is always one of the stronger SFL divisions because of Joe and Goozius.  This year Clanton joined the west and made it even stronger.  Still, because of Clanton being new to the division and Joe's choosing of the Chargers over his beloved Chiefs, I figured the Raiders and Goozius had the best chance to win the west with a predicted 13-4 record.  The Raiders did win the west, but it took every week of the season to settle the division.  Raiders finished the season at 10-7 and edged out the Chargers for the title.

I had Clanton and the Chiefs in 2nd with an 11-6 predicted finish.  Clanton fought to the end but finished the season at 9-8 and out of the playoffs with a week 18 loss to the Raiders in a winner takes all match-up.  The loss placed the Chiefs 3rd in the west.

The Chargers were my pick for 3rd in the ultra-competitive division with a respectable 10-7 record.  I nailed the record at 10-7, but the Chargers ended up 2nd and a playoff team.

The Broncos were my pick for 4th because of new ownership and knowing how good the rest of the west would be.  The pick was correct for finish, but my 8-9 record was off considerably as they finished 4-13.  I'm predicted much better things from the Broncos in season 2 with another new owner.

The Bengals are the model of consistency in the SFL and always a safe bet to win the north.  I predicted Cincy would do just that with a 14-3 record.  Unfortunately, I didn't know anything about the new Ravens owner at the time I made my pick.  The Bengals lost in week 18 to the Ravens to finish at 13-4 and 2nd in the North.  The AFC Title Game will be a 3rd meeting for the Ravens and Bengals and figures to be must-see TV to find out who will represent the AFC in Super Bowl 46.

Coach King is another long-time SFL owner who is always in the hunt.  If not for playing in the AFC North and having to face the always tough Bengals, Ravens, and sometimes tough Browns, the Steelers would always be a solid pick to with the division.  I thought even with the unknown QB situation that the Steelers would finish 2nd with an 11-6 record.  Again, the Ravens were the unknown and played upset to my guesses all season long.  The Steelers finished 3rd at 9-8.

My 3rd place prediction was the Ravens at 9-8.  An early season change in ownership completely blew up my predictions and the division.  The unknown Wilky got the most out of Lamar Jackson from the jump and led the Ravens to a division title at 13-4 with tie-breakers giving it to the Ravens over the Bengals.  The Ravens are looking to be only the 2nd first-year owner to win an SFL Super Bowl if they can get past the last 2 hurdles.  The first being AFC North rival Cincinnati in the AFC Title game.

The Cleveland Brown were my pick to finish 4th in the North, mostly because they were under new ownership and had some unanswered questions at QB.  I expected a 7-10 season and the Browns were only slightly worse at 6-11.  A new QB is likely a must-have in Cleveland for season 2 and hopefully an improved record.  The AFC North is among the toughest in the SFL with the new Ravens' owner bolstering that reputation even further.  The Browns have some work cut out for them, but Skippy can do it.

The Super Bowl 42 Champion Tennessee Titans were my pick to win the South.  Steve had shown great success with the team during the 22 cycle and despite some holes at WR, the team still looked like the best bet for the division title.  I expected an 11-6 season and deep playoff run behind King Henry and the rest of the Titans.  The team was among the bigger disappointments of  season 46 as they finished 3rd in the division with an 8-9 record.  The team struggled to pass the ball and it isn't known what direction they will go in season 2.  Is Tannehill still the man, or will Willis grasp the offense and emerge the starter in season2?  With the accelerated rebuild of the Texans and Jaguars, the Titans can't afford to take another step back in season 47.

I predicted the Houston Texans would finish 2nd at 9-8 mainly on the strength of Coach Waffle's excelleny game-planning abilities.  He led the Detroit Lions to their 1st SFL Title in only his 2nd season with the team in the Madden 22 cycle.  The signing of Tom Brady to the Lions team that year certainly helped, but Coach Waffle is able to get the best out of all of his players.  The Texans were even more impressive than expected winning the South with an 11-6 record.  The addition of Saquan Barkley was huge and if the team can limit injuries that riddled the roster in season 1, they will be a favorite for the division title again and quite possibly the AFC Title in season 2.

The Jaguars are always a tough team to predict.  They have a talented roster but seem to struggle to get the most out of them so I picked them 3rd at 8-9.  This year was different primarily because Super Bowl 45 winning owner Coolstops took over the team.  The Jaguars re-wrote the record book with an astonishing 617 points scored in the regular season.  A slightly improved defense would have made the Jaguars almost unbeatable but the defense struggled to stop teams.  Still, the team ended up 11-6, 2nd in the South and in the playoffs.  If the Jags make defense a priority in the off-season, the sky is the limit for them come season 2.

The Indianapolis Colts were picked last in the South at 6-11.  The team boasts some great talent on both sides of the ball, but QB was a question mark and turned out to be their biggest problem.  Matt Ryan struggled early and was released.  A revolving door of QBs started several games but none found any consistency.  The early retirement of Andrew Luck seems to have put this team in a downward spiral that they can't climb out of.  A mid-season ownership change may be what the franchise needed but it came too late in the season to matter.  It will be interesting to see what Coach Wa Chin Yu can do with a full off-season to prepare.  The team finished 4th at 4-13 for the season.