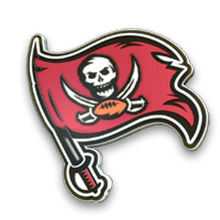 This season has been anything but ordinary but the Tampa Bay Buccaneers are still riding the pirate ship and they are headed to their 3rd straight NFC Championship Game after defeating the San Francisco 49ers 38-17. The Bucs used a balanced attack on offense, led by QB Greg Johnson who finished with a perfect QB Rating of 153.8 whole going 17-19 286yds 2TD 0Ints. The defense played lights out for the second week in the playoffs holding the high powered 49ers to just 8 2nd half points. The defense also forced 2 ints by FS Antoine Winfield Jr, taking 1 to the house for a TD. The Buccaneers find themselves poised to defend their Super Bowl title with 1 game in between. They now wait for the winner of the top seeded Detroit Lions and their division foe Carolina Panthers. Either way, the Bucs will be ready!! #firethecannons