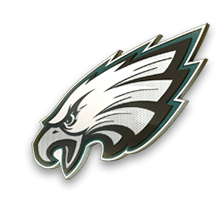 Yes, you read that correctly. NEGATIVE 103 yards. How in the world did this happen? Let's start with some background info. Rumor around the Premier Madden League has it that at the end of the year, any receivers who average greater than 19.5 yards per catch (and have 30+ catches) will be suspended for PEDs. Why is that you ask? Last season, Terry McLaurin had 50 catches for 1588 yards at a whopping 31.8 yards per reception. At the next owner's meeting, the McLaurin rule was voted on, and teams must keep receivers under 19.5 yards per reception if they have 30 or more reception. The Philadelphia Eagles garnered a reputation as unsim and someone who just chucks the ball up to their deep threat. This is fine enough, and anyone can take criticism and improve themselves. Flash forward to week 17 in the 2020 season and McLaurin is averaging 24.8 yards per reception, and needs to get below the 19.5 threshold to avoid suspensions heading into the postseason. Highly unlikely he will get below that number, the receiver is more or less stuck, and can't avoid a suspension. Any logical user would take the suspension and learn from their mistake. However, the Eagles user isn't just any logical user. This is where the incrimination begins:

This stream is the Eagles' first attempt to play the CPU controlled 49ers. After a quick scoring drive by the opposing team, the Eagles looked to match their opponent, but were held to a 3 and out. Rather than punting (as the rules state), the Eagles went for it on 4th down, and were unsuccessful. In response, the user cut the stream and quit the game. This was the night of March 31, 2019. Today is April 1, 2019. Here is his second attempt:

So what do we do? That question is up to the owners of the league, and there will likely be discussion this offseason.